The Pale Blue Dot is a photograph of planet Earth taken in 1990 by the Voyager 1 spacecraft from a record distance of about 6 billion kilometers (3.7 billion miles) from Earth, as part of the solar system Family Portrait series of images. In the photograph, Earth is shown as a tiny dot (0.12 pixel in size) against the vastness of space.[2] The Voyager 1 spacecraft, which had completed its primary mission and was leaving the Solar System, was commanded by NASA to turn its camera around and to take a photograph of Earth across a great expanse of space, at the request of Carl Sagan. 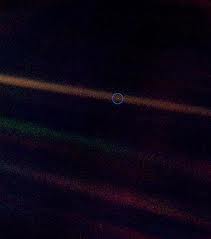